Designing, planning, constructing, and maintaining a building are tasks that involve multiple stakeholders each having their interpretations and requirements for the common dataset. Furthermore, each stakeholder consumes, processes, and manipulates information about the building during its full life cycle.

Several industries have interfaces to the construction industry and buildings in particular without this being their main industry. As there is often a need to describe some sensor, product, device in the context of the building in which it sits and as the building is itself also a feature of interest in the context of a smart city, there is a demand for a minimal, extendable ontology that describes anything in its context of a building.

The Building Topology Ontology (BOT) is a minimal OWL ontology for defining relationships between the sub-components of a building. 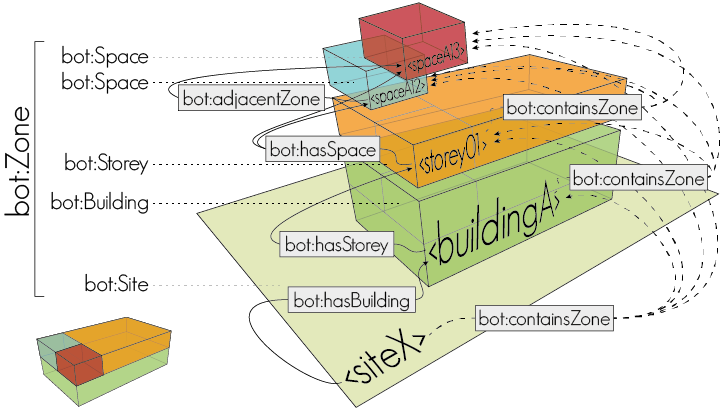 RealEstateCore describes the concepts and relationships that occur in the data generated from building systems—such as building structures, ownership, inhabitants, technical systems, sensors, and events. Essentially, it serves as the technical glue and structure that allows a user interface to be created. And this user interface is what enables property owners to connect their buildings with new services on a large scale, without worrying about building or technology-specific implementation details and formats.

The work of aligning and using the Building Topology Ontology, BRICK Schema, and RealEstateCore will give the property owner an excellent starting point for making a semantic-based digital twin. Spatial representation and mapping to BIM/IFC from Building Topology Ontology, building automation systems understanding from BRICK Schema, and additional support for managing the property portfolio as well as functions for the tenants’ operation from RealEstateCore.